Junior Sollars and the Story of the Creepers 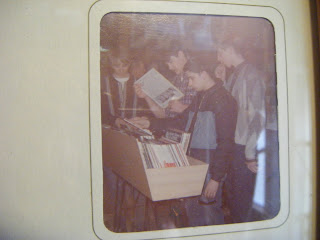 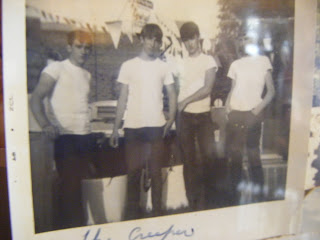 I'm pretty sure all of you are familiar with the legendary Creepers 45 on Rene called "Jammin' Granny." Well I happen to live in the same small Indiana town as Creepers guitarist Willard Sollars Jr. (known today as Junior Sollars). On a whim, I found his number, and called him. We hung out for a couple hours. He was really cool, and had no idea how much his 45 is admired. I am thinking about doing a biography/documentary on him and the Creepers, as well as Harry Weger (the country singer who produced the 45).
He has a huge shed full of memorabilia and a lot of cool info on the band. His father, whose pictures really intrigue me, was a hillbilly singer in the 30's and 40's named Willard Sollars (also known as Webb Sollars). Which I plan to learn more about and perhaps get some recordings of. Junior told me some cool facts about the Creepers; Jr. Sollars, a right-handed guitarist, has only two fingers on his left hand! He also said that in '65 they tried to pitch the 45 to Sam Phillips at Sun, he has some rare recordings of the Creepers live, as well as music from some of his post-Creepers bands, and he stated that the Creepers made two LPs. 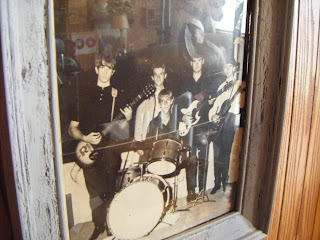 This is a huge project that I am undertaking, I think it would be cool to bring a lot of this stuff to light, and to uncover the career of his father, whose pictures make him out to be the "Howlin' Wolf" of country music. I already took a bunch of pictures that are just awesome. Please let me know what you guys think about me doing this, because you guys are the people who really care, and are the fans of the Creepers and their sole 45. Please email me if anyone would like to see some pictures! Please give me feedback! Thanks!
Posted by j.l. Russell at 7:19 AM